The Bulldogs' most heartbreaking loss: the Preliminary Final, 1997 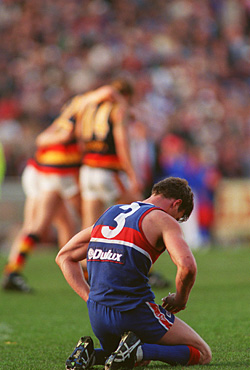 There’s a line in the wonderful ‘Harp in the South’ novels, set in the Sydney slums post-war. It’s about the poverty-stricken Irish-Catholic family, the Darcies. At one point the feckless but lovable father of the family, Hughie, reads in the paper that he has won the lottery. He hugs the wonderful secret to himself but begins making secret plans for how their lives would be transformed, including buying diamonds for his long-suffering wife ‘Mumma’.

However he then discovers that the winning ticket was another H Darcy from Surrey Hills. He gets roaring drunk, of course, but later makes a sheepish confession in bed to Mumma, who finds the whole thing rather comical.

But after Hughie falls asleep, Mumma weeps about this brief glimpse of a different kind of future, saying, ‘It’s not for the likes of us!’

The Dogs had one of those moments in 1997, a window into a ‘it could have been us’ alternative. It's become even more bitterly regretted as time goes on.

We held what seemed like a match winning lead of 22 points at three quarter time of the Preliminary Final against the Adelaide Crows  It was the first time in my lifetime that a grand final berth was a tangible reality. There, it seemed, for the taking.

The prize ahead of us - a premiership, after 43 years since that one solitary triumph in 1954 - seemed to glitter almost as much as the sunlight across that MCG arena. The weather, in fact, could not have been more glorious. The Dogs had played with verve, dash and commitment, and a fairytale season seemed to be drawing to a wonderful conclusion.

It seemed even more magical as we'd gone into the season rank outsiders to even feature in the finals, let alone play off for the premiership. The previous season was one of our most wretched, poignantly captured in the documentary 'Year of the Dogs', which portrayed an internally divided club that won only 5 games and started the season with two hidings of an average of 100 points.

(My main memory of that awful year is coming home on a train full of silent, glum supporters. Opposition full forwards had, it seemed, been lining up to kick bags on our hapless but gallant full-back Matthew Croft. One despairing fan turned to another and said, 'God who's going to play on Kernahan next week!' After a moment of mournful silence his mate replied: 'No worries, Crofty will hold him.)

And yet somehow, in 1997, with a list much the same as the year before, we'd transformed and were playing off for a grand final spot. At training a couple of nights before the preliminary final, the Western Oval was a sea of excited fans in red, white and blue.

'The Age' captioned a photo of it perfectly: 'The Cinderella team is ready to go to the ball.'

What followed from that match-winning lead at 3/4 time was a devastating, heart-breaking capitulation. I heard afterwards that it was the first match of the season that we failed to score a goal in a quarter. We lost by two points.

There's been so much debate about the match. Why didn't they put 'somebody else' on Darren Jarman who went on a personal last quarter rampage kicking, I think, 3 goals? (Come to think of it: who WAS on Jarman?)

Was Tony Liberatore's snap at goal a few moments into the game actually a goal, instead of the point that it was adjudicated to be? (Many swear it was).

But for me there's really only been one question: why did we blow it?

The numbness when the siren fell, the sight of weeping, ashen-faced fans, the vision of players like Rohan Smith pounding the turf with his fist, the boorish behaviour of the jubilant Crows' supporters - they are memories that don't easily fade. It's only half a joke to hear from fellow supporters that the sound of the Crows' theme song blaring out after the siren, while we sat stunned has a similar impact to traumatised Vietnam veterans hearing helicopters.

I've wondered sometimes, if we'd won that match, what our history would have been over the years since, where we have unsuccessfully contested a string of preliminary finals. Would winning that one have opened up a portal to a different kind of future?

It feels as though the blow that loss landed to our collective pysches, players and fans alike, has kept us in a state of arrested development. Could Tony Liberatore's 'goal' have taken us into a different era, one where champions like Chris Grant and Brad Johnson have a premiership or two to their names?

If 'someone' had curtailed Jarman that day, would Lindsay Gilbee's shot at goal in the last quarter of the 2009 preliminary, for example, have speared through?

Other times it just seems as though that loss was in itself fated. Just like the characters in 'Harp of the south', that other future, where we too line up for grand final tickets, attend corny events like the grand final parade, and sit in our seats with butterflies in our stomachs as our team runs out on the greatest day of all, is 'not for the likes of us.'